The officers and the staff of STEELHOUSE have the knowledge and the experience to offer the best in the construction of your own area.

The crews of STEELHOUSE have great skills in erection and assembly of light steel constructions and the appliance of drywall construction systems and modern materials. The know-how and the experience of our crews is demostrated by the quality and the quantity of the constructions that have been realised with the SCS.

Your construction is always supported by the specialised engineers of STEELHOUSE. Our engineers are experienced in antiseismic analysis cases and design of steel structures and guarantee the strength and the high quality of your work.

The licensed co-workers' net is under constant education by officers of STEELHOUSE for practical and theoritical matters. The co-workers are constantly supported by the engineers and the gangers of the company. The observanse of the specifications that STEELHOUSE set to the co-workers and their strict supervision guarantee the quality of your structure. 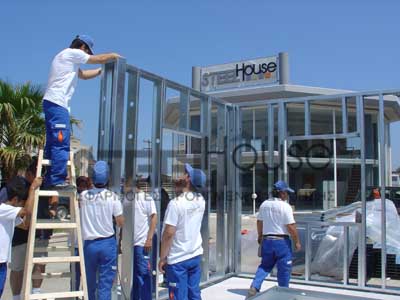 The goal of STEELHOUSE is to be always pioneer. The steels constructions in the greek area is something new and the greek know-how in this area is relatively restricted.

For this purpose, STEELHOUSE was looking for and adopted the know-how of the European countries and America where exists a long-term tradition and experience in such constructions. Already since 2004, STEELHOUSE is a member of the Steel Framing Alliance (SFA) and has an access to the new research programmes, technical specifications and prescriptive configurations.

For the import of the appropriate steel cold formed profiles, since they were not available in Greece, it came in contact with the biggest steel producer in Europe the at that time called ARCELOR (now called ARCELOR-MITTAL).
Through ARCELOR it came in contact with the effort that was made in Europe for the formation of an organisation such as the SFA of America, under the patronage of ARCELOR.

As the only company in Greece that involved with the subject, became one of the founder members of European Lightweight Steel Construction Association (LSK) since 2005, when the idea existed. Since then, STEELHOUSE maintains a two-way relationship with the Association, its activities and its programmes.

STEELHOUSE maintains traditionally in the section of drywall construction a collaboration with Knauf.